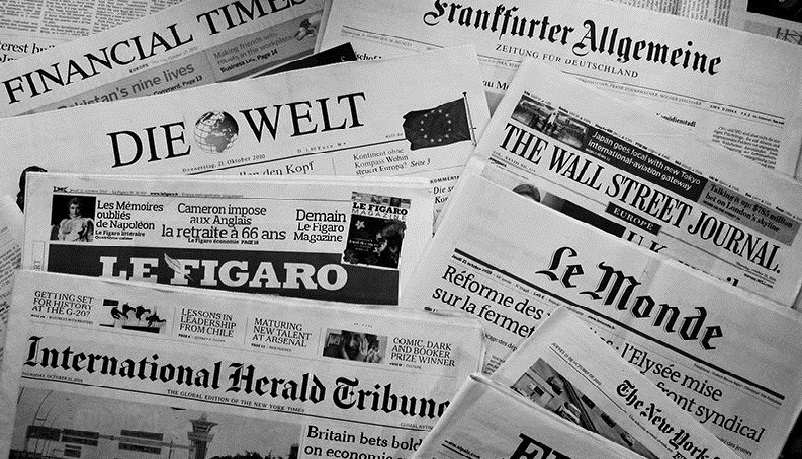 "Prensa Europea" by Javier Micora, used under CC BY 2.0 / Desaturated from original, with colour filter.

Many news outlets are struggling to survive in rapidly evolving print and digital media markets. This has caused concern that these markets will be dominated by a small number of firms with political agendas. What can regulators do to prevent this from happening and ensure, as much as possible, that the public is served by a competitive, politically diverse marketplace of ideas?

As another election season gets underway in the US, questions are being raised about political bias in the media. Many national news outlets are highly partisan, and local news markets, where many people get their information on city, county, and state elections, are generally served by a single newspaper. Should regulators adopt policies designed to produce a more robust marketplace of ideas?

Regulators have long had an interest in ensuring that media markets are politically diverse. As the Supreme Court has said, “The widest possible dissemination of information from diverse and antagonistic sources is essential to the welfare of the public.”[1]

But there is also a second regulatory goal, ensuring that markets have a large number of competitive firms. This helps to keep prices low and allows the largest possible number of customers to be served.

Unlike modern local newspaper markets, earlier in the century even small or medium sized cities often had multiple competing papers. Partisanship was intense and explicit.

The economic and political goals often appear to conflict. In the US, for example, Congress has since 1970 allowed some newspapers to form “joint operating agreements” under which they can effectively collude in setting circulation and advertising prices. This policy would seem to be counterproductive from a standard antitrust viewpoint, but it is justified by the perceived benefits of increasing the number of firms in the market and so preserving editorial diversity.

Understanding how specific policies affect these two goals is central to formulating effective media policy. The rise of digital media adds to the importance of understanding these issues.

Historical lessons from the regulation of newspaper markets

In this research, we provide a historical perspective focused on the drivers of competition and political diversity in US newspaper markets of the early twentieth century. We formulate an economic model of a newspaper market, and estimate the model using rich data on daily newspapers in 1924.

The rise of digital media adds to the importance of understanding these issues.

Our main finding is that, in the period we study, the economic and political goals of media regulation were aligned: competition for readers both lowered prices and enhanced political diversity, and policies that increased the number of papers and their incentives to differentiate politically paid a “double dividend,” increasing both traditional economic welfare and the diversity of political voices in the marketplace of ideas.

The early twentieth century is a particularly rich laboratory for studying these issues. Before the advent of radio and television, newspapers were essentially the only source of daily political information. Unlike modern local newspaper markets, which are typically dominated by a single large paper, earlier in the century even small or medium sized cities often had multiple competing papers.

Partisanship was intense and explicit, with most papers having historical or current declared affiliations with political parties. For example, in 1868, the Democratic Detroit Free Press announced, “The Free Press alone in this State is able to combine a Democratic point of view of our state politics and local issues with those of national importance.”[2] Similarly, in 1872, the Republican Detroit Post declared as its mission “To meet the demands of the Republicans of Michigan and to advance their cause.”[3]

Our model incorporates media firms’ decisions over which markets to enter, which political party to affiliate with, and how much to charge both readers and advertisers. It allows for the possibility that readers prefer like-minded news, and that they may regard newspapers with the same political affiliation as more substitutable than newspapers with different affiliations. The model also incorporates the incentives of advertisers, who wish to reach the widest audience possible with their ads.

Ideological preferences, political differentiation, and the importance of competition

The model shows that competition was a key force promoting ideological diversity in the marketplace. We measure diversity by the share of households who read at least one newspaper affiliated with each party. We find that if newspapers were insulated from competitive pressures, acting as monopolists rather than competitors, this measure of diversity would have been substantially lower.

Simulation and evaluation of regulatory interventions in media markets

Because the model describes the behavior of the key actors in the market, we can also use it to simulate regulatory policy and assess their ability to promote competition and diversity in the markets we study.

Perhaps the most common policy is explicit subsidies. In the US in the early twentieth century, this mainly took the form of free or discounted distribution through the US postal service; today, many countries provide financial support to entering newspapers. According to simulations from our model, such subsidies advance both economic and political goals. They increase entry, lower circulation prices, and enhance ideological diversity.

We also consider antitrust exemptions such as joint operating agreements that allow collusion among firms. Here, the results are more nuanced and depend critically on the fact that newspaper markets are “two-sided,” with papers setting both circulation and advertising prices.

The market on its own may supply too few products and too little diversity.

We find that allowing newspapers to collude in setting circulation prices is largely counter-productive. As one would expect, it is at odds with standard economic goals, leading to higher prices, reduced circulation, and lower total economic benefits. Yet it also has at best mixed effects on ideological diversity — it tends to increase entry of new firms (this is the main potential benefit used to justify the policy), but this is largely offset by the fact that high prices discourage people from reading papers and so reduce exposure to diverse views.

What are the implications for policy debates today? The world of cable TV, online news, social media, and search engines is of course very different from the print newspaper markets of 1924, and it would be silly to extrapolate any of our exact quantitative estimates to make decisions about current policy. But we think there are several broader economic lessons that are likely to remain relevant.

The basic premise that media may need to be regulated differently from other industries is strongly supported by our evidence.

First, policies that increase entry and readership will often be consistent with both economic and political goals. The key economic logic is that the market on its own may supply too few products and too little diversity. This need not be the case, but economic theory shows that it can happen in markets that are dominated by a small number of news outlets that are differentiated by their political affiliation. That description certainly fits many modern news markets.

Second, strengthening news sellers’ ability to earn money through advertising may be a more effective policy tool than strengthening their ability to collect revenue from readers. Intuitively, the former works to subsidize readership, while the latter tends to discourage it. This finding is particularly important for the preservation of competition and diversity among Internet news providers, where advertising revenue plays a dominant role.

Finally, the basic premise that media may need to be regulated differently from other industries is strongly supported by our evidence. The reasons for this — the importance of ideological diversity and the nuanced nature of competition when firms can set both advertising and circulation prices — are likely to remain as or more relevant today.