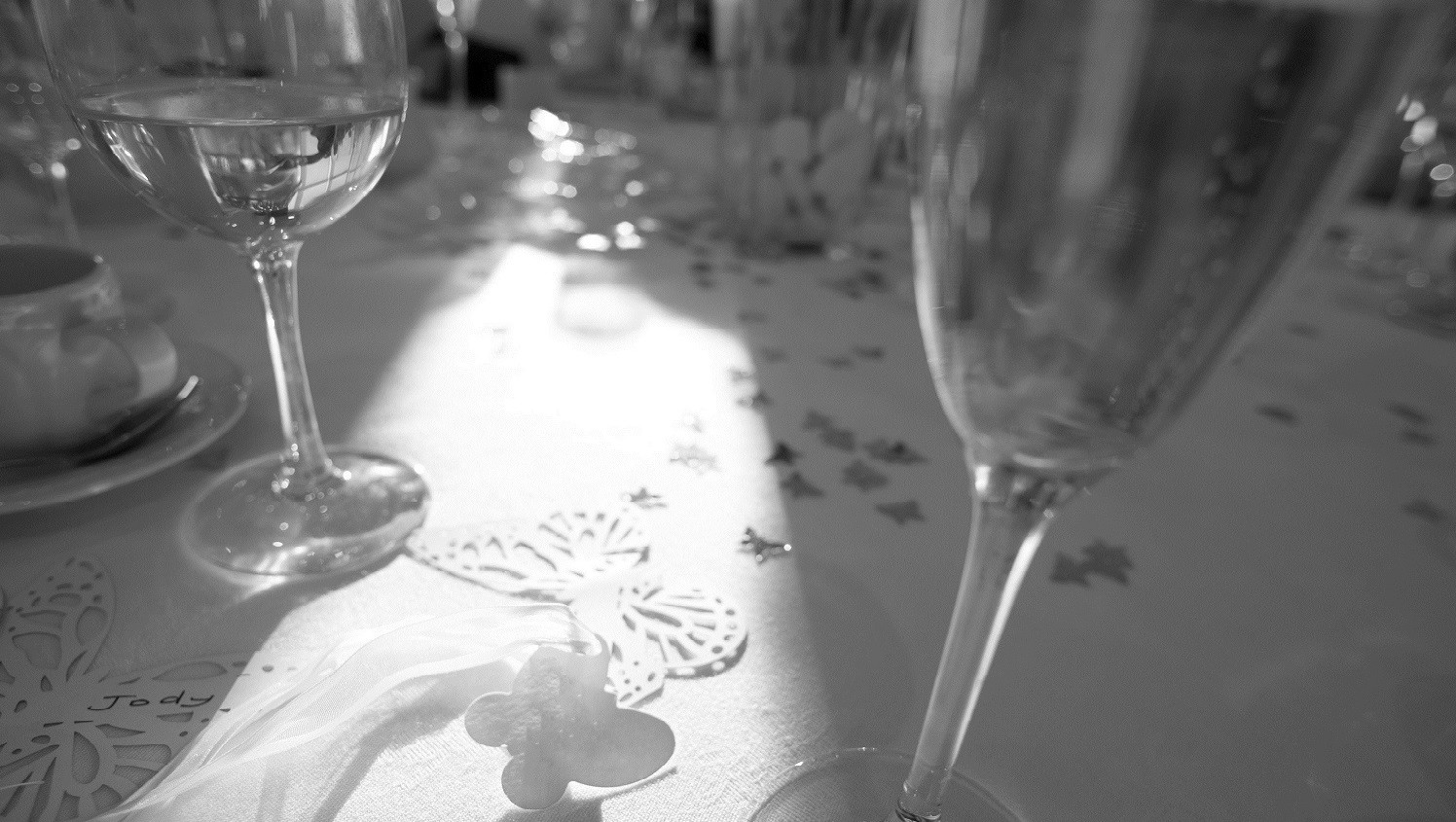 "Wedding table-2514" by stockarch, used under CC BY 2.0 / Desaturated from original, with colour filter

By regulating when divorce can occur and how resources are divided when it does, divorce laws can affect people’s behavior and their wellbeing both during marriage and at divorce. Household survey data from the United States shows that the introduction of unilateral divorce in states that imposed an equal division of property is associated with higher household savings and lower female employment rates among couples that are already married. This paper develops a model of household behavior to account for these effects and study how current laws can affect the wellbeing of different household members. Compared to equal division of property, separate property or prenuptial agreements can reduce distortions and increase equity whenever spouses share consumption equally.

During the 1970s and 1980s, divorce laws were rewritten around the United States. Until then, mutual consent—the consent of both spouses—was often a requirement and upon divorce, property was assigned to the spouse who held the formal title to it; usually, this was the husband.

In the 1970s and 1980s, divorce laws were rewritten around the United States

Then, profound state-level reforms brought about the so-called “unilateral divorce revolution.” Most couples now entered a legal system in which either spouse could obtain a divorce without the consent of the other and also keep a fraction of the marital assets, often close to fifty percent.

This study explores the impact of the reforms—unilateral divorce and equitable property division—on the economic behavior of couples.  In the US, these reforms affect no small number of people, as forty percent of married couples and about one-third of all people over their lifetimes are divorced. So how did the unilateral divorce revolution change the consumption, the labor supply decisions, and ultimately the wellbeing of married and divorced couples?

There are at least two ways in which we might expect the reforms to affect household behavior. First, because divorce is one of those events for which people cannot buy insurance, savings can act as self-insurance, allowing people to face some of the financial costs associated with marriage dissolution. Different ways of dividing property can affect the insurance role of savings. Second, even among couples that do not split up, a change in divorce laws can change a spouse’s options outside of the marriage. For instance, a property division regime change that favors one spouse can improve her position inside the marriage, particularly if she can obtain divorce without the other partner’s consent. This reallocation within marriage could result in changes in private consumption, savings, and labor supply.

Economists typically do not observe how consumption and property are allocated between a husband and wife. So we cannot directly measure whether either spouse would obtain more resources in a divorce, nor can we compare outcomes in a title-based regime that assigns property to the spouse who holds its title with an equitable property regime that imposes an equal or equitable division of property. To assess whether and how the reforms affected couples, I first conduct a difference-in-differences analysis examining household behavior around the legal changes. This paper therefore compares changes in the savings and labor market behavior of couples in states that implemented divorce law reforms with changes in the behavior of couples in states that had not yet switched. The longitudinal data used come from the National Longitudinal Survey of Young and Mature Women (NLSW) and the Panel Study of Income Dynamics (PSID).

Because mandated equal division of property does not reflect the allocation of resources within marriage, it ultimately distorts household saving behavior.

From this “difference-in-differences” exercise, two main facts emerge on the impact of unilateral divorce in states with different property division regimes. First, in states with equal division, households reported higher net savings (around 16%). Second, in such states, women who were already married became less likely to work, by approximately 5 percentage points. By analyzing additional time use surveys between 1965 and 1993, I find that the decrease in the labor supply of women was associated with an increase in the amount of leisure time they enjoyed. In states where property was assigned to the spouse who held its title, I did not observe any significant changes in net savings or female labor supply in response to unilateral divorce laws.

A structural model of divorce laws and household behavior

To study the channels though which the reforms affect married couples, generating the empirical patterns observed in the data, I develop a dynamic model of family decision with two key features. First, when spouses can divorce without the consent of their partner, the threat of divorce can prompt one party to appropriate more resources inside the marriage whenever her divorce allocation exceeds that in the marriage but there is still an overall gain from the marriage to be shared. Second, savings decisions vary across regimes. In title-based property regimes, couples decide how much to save and how to allocate savings between husband and wife. In doing so, they can account for both spouses’ individual needs to save for divorce depending on their permanent income and their consumption share inside the marriage. But in a regime of equal division of property, spouses can only decide total savings, as the law regulates the division of property more strictly, limiting the options available to households.

Today, equal division may no longer benefit the spouse with the lower income

With these features, the model provides a qualitative explanation for the observed empirical patterns. In states with equal division of property, the law favors women at the time of divorce. When the equal division of property grants them more resources in the event of divorce than they are receiving in the marriage, unilateral divorce means that they can use the threat of divorce in their favor while remaining married, thereby increasing their leisure. At the same time, married couples save more because spouses’ individual incentives to save are distorted because they cannot choose how to allocate savings between man and woman in the increasingly likely event of a divorce. Because mandated equal division of property does not reflect the allocation of resources within marriage, it ultimately distorts household saving behavior.

Divorce laws and the well being of women

Because the reforms were partly motivated by a desire to support women through divorce, the paper also studies how female well-being changes as a result of the reforms. For couples that married before the reforms, it estimates the wife’s Pareto weight—the priority of a wife’s relative wellbeing in the marriage—to be 40% of the husband’s weight. After unilateral divorce is introduced, that ratio shifts whenever a woman finds her conditions in divorce more favorable than the one she is currently experiencing in her marriage.

With free and enforceable prenuptial agreements, few couples would want to stay with the current equal division

So how do divorce laws, which were passed when men and women’s economic outcomes differed substantially, affect wellbeing today? Simulations from the model suggest that, as intended by the policymakers who promoted it, the equal division of property gave more assets to women in the sample compared with a title-based regime that would grant them about 40% of household wealth. Thus, for couples that married before the 1970s, the reforms likely achieved the goal of supporting women through divorce. However, their effect is more nuanced if we believe that today’s couples may have a different, more egalitarian, distribution of resources within marriage. If that is the case, equal division no longer necessarily benefits the spouse with lower income. For example, when women consume as much as their husband in marriage, but have lower permanent income, they can be better off in a separate property regime. The reason is that wives need to accumulate more savings than husbands during marriage in anticipation of a divorce if they have lower income. Equal property prevents wives from doing so, leaving them more exposed to the financial costs of marriage dissolution. A title-based regime grants more flexibility to the household.

The results of this study suggest that current property division law may make it harder for people to smooth consumption through divorce, while failing to grant more resources to the secondary earner. Cheap and enforceable prenuptial agreements can help overcoming some of these limitations. In a policy simulation, I show that if couples could choose at the time of marriage how to divide their property through a free and enforceable prenuptial agreement, few couples would want to stay with the current equal division. Studying whether these agreements can actually improve household wellbeing is an exciting subject for future research.