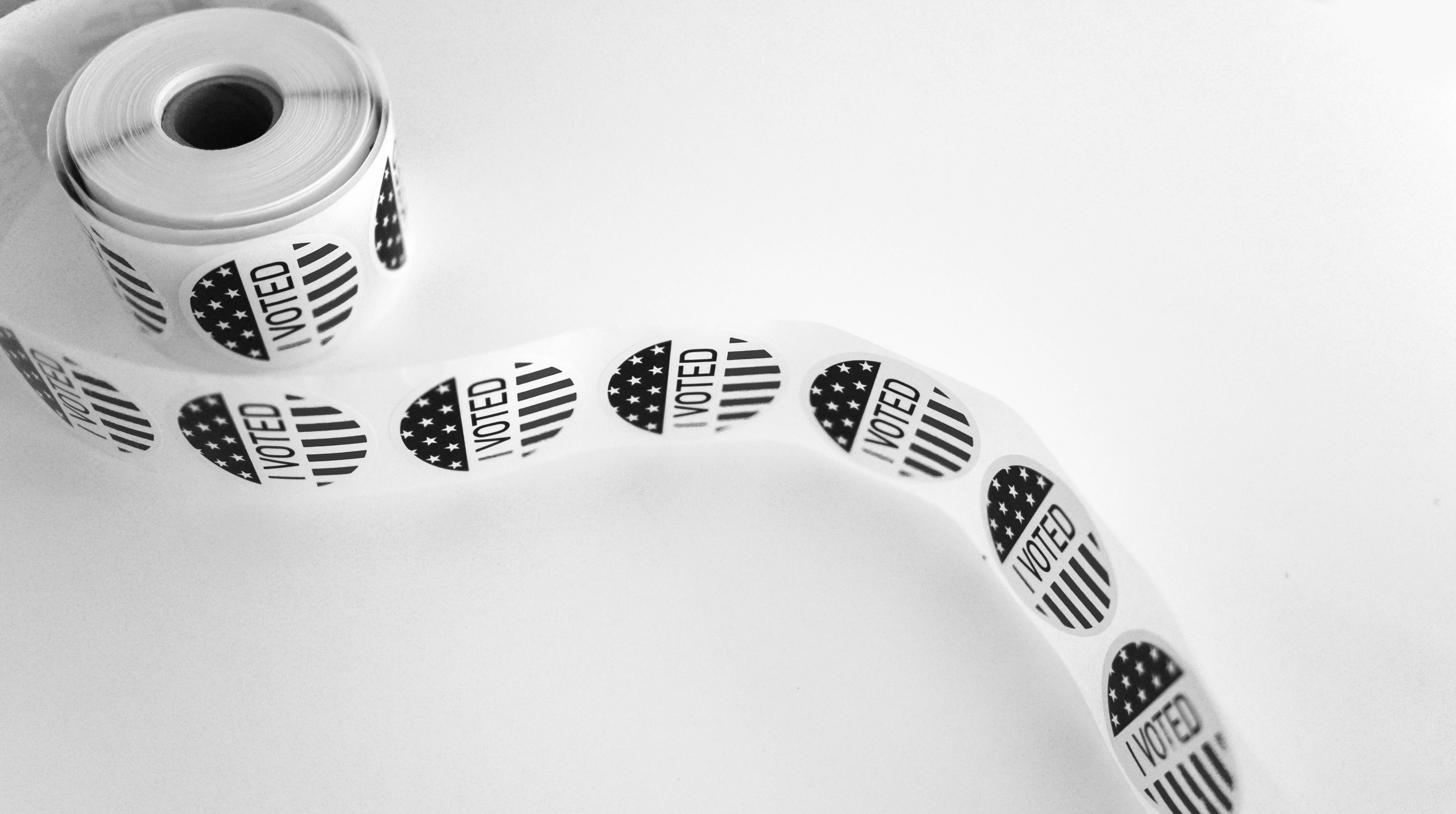 Photo by Element5 Digital via Pexels, used under CC by 2.0 / Desaturated from original with colour filter.

How much does consuming news with a strong political slant influence Americans’ votes in presidential elections? And how strongly do people prefer news sources that are slanted towards their own political preferences? This research provides evidence on the persuasive effects of slanted news and viewers’ tastes for like-minded news by analyzing data on the three big US cable news channels: CNN, Fox News, and MSNBC. The results indicate that these news sources – and Fox News in particular – have the potential for large effects on the outcomes of elections.

The emergence of ‘fake news’ on social media during the 2016 US presidential election campaign has brought renewed urgency to questions about media bias and its potential to influence electoral outcomes. How much does consuming news with a partisan slant change voters’ decisions at the ballot box, if at all? And how strong are people’s preferences for news with a slant that favors their preferred candidate or party?

How much does consuming news with a partisan change voters’ decisions at the ballot box, if at all?

These two questions are closely linked. A naive analysis might conclude that if some group of slanted media consumers voted for the candidate favored by their news sources at much higher rates than among the general population, then those sources must have influenced their voting decisions.

An alternative explanation is that people prefer news sources that conform to their pre-existing partisan preferences. Regardless of the media they consume, they may have already been planning to vote for someone and simply read slanted stories for the enjoyment of hearing their preferred candidate praised and their political opponents attacked. The fact that voting for the favored candidate or party is more common among those who consume news slanted towards one candidate or party is not, on its own, evidence that media slant is influential in voting decisions.

Our study introduces a method to distinguish influence by media slant from selection into consuming media slant by existing partisans. We examine the cable TV news industry, where since the inception of Fox News in 1996, viewers have been offered news with a distinctly right-wing point of view and where since around 2006, a change of format by MSNBC has offered news with a liberal slant. According to surveys, cable channels – in particular, these two plus CNN – remain the main source of news on political campaigns even in the digital age (Pew Research Center, 2017).

Our analysis makes use of the numerical ordering of channels that cable subscribers encounter when they turn on their TVs. This cable channel lineup varies widely across local cable systems, and it turns out to have a substantial effect on ratings of the news channels.

Some fraction of TV news consumers are not seeking out a particular channel but looking for any news: they are more likely to stop on a news channel earlier in the order than one further on. As a result, we estimate that a 10-channel change in position – for example, going from the 40th channel in the lineup to the 30th – leads to an increase in the average viewership of Fox News of about a 1.7 minutes per week.

Figure 1 demonstrates this relationship graphically using a wide variety of cable channels in addition to the news channels. Separately for each channel, we analyze viewership at the individual level on the basis of demographics and state-year fixed effects. We then average the residual by channel position across channels. The negative relationship indicates the negative correlation between channel position and viewership after taking account of demographics and state-year fixed effects.

Note: The top panel shows the relationship between the residual component of minutes watched and channel position, in a set of 34 comparable cable channels whose median positions across cable system-years are between 30 and 60 and thus typically occupy similar positions to FNC and MSNBC. Residuals are constructed by regressing minutes watched per week (in the MediaMark individual-level dataset) on the full set of individual demographics plus state-year fixed effects. The predicting regressions are estimated separately for each channel, such that demographic effects and state-specific time trends are allowed to vary by channel. The points in the figure are averages of these residual minutes across all channels located at a given ordinal position. The blue line is the least-squares fit. The bottom panel shows the density of the three news channels’ ordinal positions across system-years for comparison.

We are able to show that the positions of Fox News and MSNBC in the local cable system’s lineup are unrelated to local political preferences. For example, Fox News is not systematically in a better position in places that were more conservative prior to the introduction of the channel.

We find that, in fact, there is such a correlation. For Fox News, it is strong. McCain’s vote share in the 2008 presidential contest was 0.27 percentage points higher for every 10 positions earlier in the lineup was Fox News’ local channel position, relative to the state average.

Given the position-related changes in Fox News viewership, this implies that every additional minute per week of average viewership in a zip code produced about a 0.15 percentage points increase in the Republican presidential vote share in that zip code.

The effects for MSNBC go in the opposite direction (higher MSNBC viewership leads to lower Republican vote share) but are smaller in magnitude and more statistically noisy. Since the overall average level of Fox News viewership is around 40 minutes per week, this estimate implies that the cable news channels, and Fox News in particular, have the potential for large impacts on election results.

The ratings for Fox News grew steadily over the period we examine in our study. From 2000 to 2008, its average viewership roughly doubled. At the same time, according to our content analysis, its slant moved to the right. MSNBC’s slant moved left after 2006, although not as sharply as Fox News moved to the right. These results thus complement and amplify earlier research that measured the effect of Fox News on vote shares during its inception from 1996 to 2000 (Della Vigna and Kaplan, 2007).

In light of the results from our analysis of channel lineups, these changes in content and viewership could lead to large changes in voting behavior. To understand the interaction between media influence on the one hand and consumer preferences for like-minded news on the other, we build an economic model of demand for cable news.

The model allows us to measure the ‘media power’ (Prat, 2018) of the cable news channels, meaning the degree to which an owner of one or more of the channels could change political outcomes by changing its content. This persuasive potential depends on both the channels’ ability to change viewers’ minds and viewers’ tastes for like-minded news.

To see why, imagine that MSNBC offered more strongly left-wing slant than it currently does. This might lead to greater change in political beliefs among viewers who continued to watch, but it might also cost MSNBC some moderate viewers turned off by the more extreme slant. Hence, a move like this might lead to more committed Democratic partisans and fewer swing voters in MSNBC’s audience, reducing its ability to influence elections.

Our estimates imply that viewers are not all that sensitive to channels’ slant, and hence the first effect tends to dominate the second. The cable channels thus have broad latitude to change editorial policy in order to influence election outcomes. We estimate that CNN, the channel with greatest media power according to our estimates, had the ability to move election results by more than 18 points in 2008.

We can also use the model to compare the editorial strategy of cable channels based on whether they seek to maximize ratings or media power. In other words, we can compare how slant would differ between a channel purely interested in ratings (for example, because it cares about its advertising revenues) and one with a political agenda.

We find that all three channels’ ratings-maximizing slant is quite centrist. CNN’s observed slant is close to this level. But Fox News is far to the right of the level that would generate the highest ratings: it is much closer to the level of slant that maximizes Republican vote share; and in 2008, it actually exceeds this point. MSNBC after 2006 is well to the left of the position that would generate the greatest ratings.

This analysis suggests that the editorial policies of Fox News and MSNBC after 2006 are driven by something other than ratings maximization. This finding is surprising, because if channels care about profits, which are heavily dependent on advertising revenues, ratings should be a first-order concern. Evidence thus suggests that news channel owners care about influencing political outcomes.

A caveat here is that although ratings are related to profitability, they are not the same thing. Advertising rates vary with the demographics of the audience, and it is possible that a smaller audience is more valuable than a larger one if its composition is skewed in ways that are attractive to advertisers – for example, towards higher income households. Cable channels also earn revenues from affiliate fees paid by cable system operators, and these fees might be higher for a channel that is ideologically differentiated from its competitors.

The potential impact of media consolidation

Our model also helps to understand what would happen if the industry were to experience further consolidation or exit by one of the existing players. The cable news industry is already highly concentrated, and given the small number of competitors, ownership changes or exit by any one channel can have meaningful effects.

Without Fox News, the Republican vote share in 2008 would have been six percentage points lower

We find that in a hypothetical world without Fox News but with no other changes, the Republican vote share in the 2000 election would have been about half a percentage point lower. By 2008, the effect of there being no Fox News rises to more than six percentage points – a result of the channel’s increasing viewership and increasingly conservative slant over this period.

All of these results suggest that citizens and regulators have reason to be concerned about media consolidation and the non-market objectives of media owners. A hypothetical monopolist controlling all three channels and interested in electoral influence would have enormous power over election outcomes.

Indeed, the channels on their own already have large enough audiences to be electorally decisive. A key challenge for policy-makers is to balance citizens’ concerns about these issues while respecting the broad purview of the First Amendment.

This article summarizes ‘Bias in Cable News: Persuasion and Polarization’ by Gregory Martin and Ali Yurukoglu, published in the American Economic Review in 2017.

Gregory Martin and Ali Yurukoglu are at Stanford University.