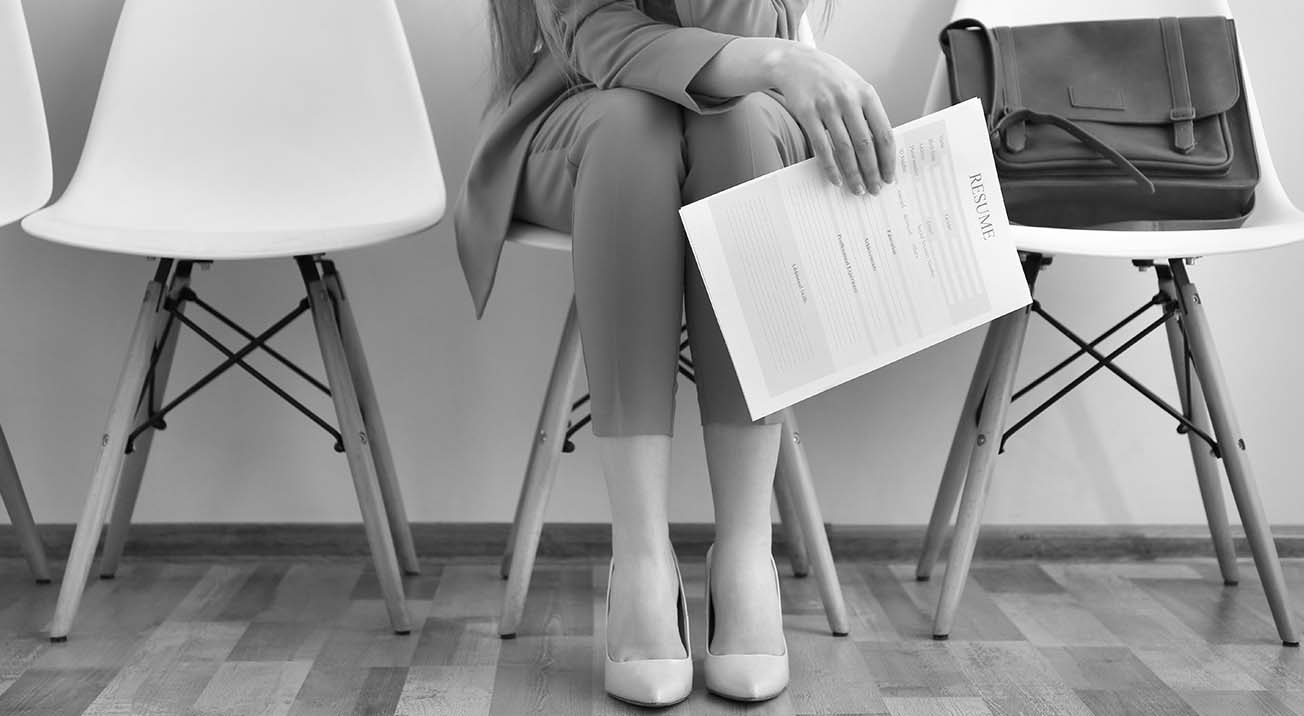 Photo by Africa Studio. Desaturated from original with colour filter.

People who are receiving unemployment benefits and looking for a job are typically required to consider occupations beyond their preferred line of work, at least after an initial period of joblessness. But how should jobseekers decide which occupations to consider, and how should employment agencies advise them?

A team of economists has developed a new tool to provide tailored advice to jobseekers at low cost. The tool is based on two alternative algorithms that identify potentially suitable occupations: one based on observed labor market transitions; the other drawing on O*NET, an online tool for career exploration and job analysis, which identifies for each occupation a set of related occupations requiring similar skills.

In an experimental test of the impact of their job search tool, the researchers find that providing information on alternative occupations stimulates the average recipient to broaden their search to a more diverse range of opportunities. What’s more, those who have been unemployed for longer periods see a significant rise in their invitations for job interviews.

The study finds that the effects of the tool differ depending on jobseekers’ initial search strategies. Those who are initially searching in a narrow set of occupations become broader after receiving suggestions from the job search tool, while those who are already searching broadly become narrower after seeing the suggestions. These changes are the same when looking at the jobs to which each participant applies.

As an explanation for these findings, the researchers suggest that when people lose their job, it is likely that they focus on searching for a new one in their previous occupation, thus adopting a narrow search strategy. If all other occupations are perceived to be much less suitable, the provision of some alternative occupations by the job search tool has little impact.

After a few months, however, unsuccessful job search indicates that the prospects in an individual’s preferred occupation are lower than expected. This makes them more open to suggested alternatives.

In contrast, jobseekers who search broadly from the outset consider many occupations roughly equally attractive. For them, the suggestions provide direction to focus on specific occupations. As a result, their search strategy becomes narrower.

Overall, the results of this experiment suggest that jobseekers find it difficult to access relevant labor market information themselves. Tailored advice on alternative occupations can be offered in a low-cost, automated way, and it can improve recipients’ job prospects considerably. Since this approach can easily be replicated and scaled up, it has important potential for labor market policy-making.

Do jobseekers benefit from tailored advice about suitable occupations provided by employment agencies? This column reports the results of a randomized field experiment in which a group of unemployed people received suggestions for alternative occupations based on labor market statistics. The researchers find that the information stimulates the recipients to broaden their search to a more diverse set of occupations. What’s more, they receive a significantly larger number of invitations to job interviews, which is concentrated among those with longer unemployment. These findings suggest that jobseekers find it difficult to access relevant labor market information themselves, and that they can be offered valuable tailored advice in a low-cost, automated way.

In most developed countries, people who are receiving unemployment benefits and looking for a job are required to search ‘broadly’, at least after an initial period of several months out of work. In other words, they are asked to consider occupations beyond their preferred or past occupation.

Such requirements suggest that ‘broadening’ people’s search will improve their job prospects. But little is known about how exactly such broadening should occur. How should jobseekers determine which occupations to consider? And how should they be assisted and advised? Since alternative occupations should both fit their skills and offer sufficiently good job prospects (a relatively high ratio of vacancies to jobseekers), it is not trivial to identify the optimal set of occupations to search.

We have developed a tool to provide tailored advice to jobseekers at low cost. The tool is based on two alternative algorithms that identify potentially suitable occupations beyond the preferred occupation:

Existing evidence on the effectiveness of job search assistance

A large body of research has evaluated the effectiveness of assistance to jobseekers, but much of this work pools all types of assistance, or even evaluates a combination of assistance and monitoring of job search efforts (Ashenfelter et al, 2005). A meta-analysis of the evaluation of active labor market policies by Card et al (2010) merges ‘job search assistance or sanctions for failing to search’ into one category. As a result, it is not clear which element of the policy generates documented successes.

Only a small number of experimental studies focus specifically on jobseeker advice, mostly through counseling provided in the form of caseworker meetings. (Examples include Bennemarker et al, 2009; Crepon et al, 2013; Krug and Stephan, 2013; and Behaghel et al, 2014.) Since this advice is labor-intensive, it is relatively costly, and the benefits need to be substantial to achieve cost-effectiveness.

With online search now the main way of finding a job, advice can be provided in a tailored and low-cost fashion

We are aware of only one study to date that evaluates the impact of information provision to jobseekers. Altmann et al (2018) evaluate the effects of a one-shot provision of generic information via traditional mail. The information includes suggestions on how to search for jobs.

The study finds no overall effect, but the authors do find improved outcomes for those at risk of long-term unemployment. We argue that information tailored to the individual, and offered in a way that enables direct incorporation of the suggestions into job search activities, is likely to be more effective.

We have designed a simple job search tool and tested its effects in a ‘randomized controlled trial’. While the provided suggestions are tailored, the underlying methodology is easily replicable. We incorporated the tool into a standard job search engine, showing that advice can indeed be provided at very low cost.

Jobseekers using the tool have to specify their preferred occupation. Based on this occupation, they receive a list of suggested alternative occupations. These suggestions can be included directly into their search query, so that corresponding vacancies can be found with one mouse click.

The suggestions are based on two methodologies:

Note that while the first methodology is based purely on the resemblance of two occupations, the second methodology includes an additional notion of job availability. If a particular occupation requires very similar skills but is rarely available, very few transitions would be observed and it would not be included as a suggestion.

To highlight the role of job availability, the search tool also provides access to ‘heat maps’, which show the ratio of jobs to jobseekers per broad occupational group in various geographical regions.

We tested the tool in a randomized study in which 295 unemployed jobseekers used the job search engine in the computer lab of the University of Edinburgh for at least half an hour per week over a 12-week period.

All participants used the standard job search engine for three weeks, while half switched to the version that provided suggestions from the fourth week onwards. The job search engine contained jobs that were made available by the largest UK online job search site (Universal Jobmatch), in which the vacancy database exceeds 80% of the official UK vacancy count.

The impact on job search behavior and job prospects

We find that the suggestions affect job search behavior significantly. On average, jobseekers who receive suggestions consider a more diverse set of occupations in the vacancies that they look at.

The impact differs depending on the initial search strategy. Those who are searching for a narrow set of occupations initially become ‘broader’ after receiving suggestions, while those who already searched broadly become narrower after seeing the suggestions. We find the same changes when looking at the jobs to which each participant applies.

It should be noted that these changes in job search strategy are in no way ‘mechanical’. From the list of suggestions, participants could deselect any occupation they did not consider of interest. They could even turn the suggestions off completely if they preferred, and return to searching with the standard job search engine (although most participants kept using the suggestions occasionally until the end of the study).

While the change in behavior suggests that jobseekers consider the advice useful, the next question is whether this leads to improved prospects of finding a job. Our results suggest that this is the case.

Overall, we take this as indication that increasing the breadth of search increases job prospects, and targeted job search assistance can be beneficial. Our focus is on job interviews because the small sample size prevents reliable statistical inference regarding the number of jobs found (which is much rarer event).

These results can be explained using a stylized model that describes job search strategy. When people lose their jobs, it is likely that they focus on searching for new ones in their previous occupations, thus adopting a narrow search strategy. If all other occupations are perceived to be much less suitable, our endorsement of some alternative occupations has little impact.

After a few months, unsuccessful job search indicates that the prospects in an individual’s preferred occupation are lower than expected, making them more open to suggested alternatives.

Jobseekers who search broadly from the outset consider many occupations roughly equally attractive. For them, the suggestions provide direction to focus on specific occupations. As a result, their search strategy becomes narrower.

Using a ‘field-in-the-lab’ experimental approach, we show that advising jobseekers on alternative occupations can provide considerable benefits. As online job search has become the dominant channel for jobseekers, advice can be provided in a low-cost and tailored fashion. Our methodology uses skill transferability and observed occupational transitions to suggest opportunities that fit the preferred occupation of the jobseeker.

The results provide promising evidence that tailored advice can improve job prospects. Since this approach can easily be replicated and scaled up, it has important potential for policy-making.

Future research should combine a larger sample size with administrative data on job finding to assess the long-run impact on job finding and job stability. It should also analyze general equilibrium effects.

This article summarizes ‘Providing Advice to Jobseekers at Low Cost: An Experimental Study on Online Advice’ by Michele Belot, Philipp Kircher, and Paul Muller, published in the Review of Economics Studies in July 2019.

Michele Belot and Philipp Kircher are at the University of Edinburgh. Paul Muller is at the Vrije Universiteit Amsterdam.