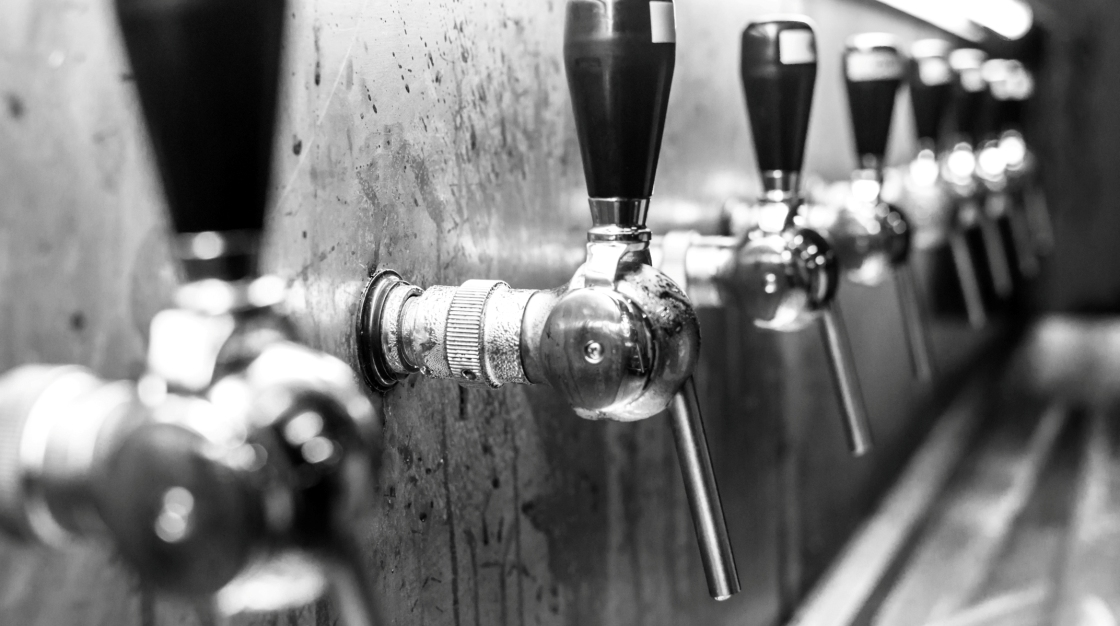 "Stainless steel faucets", by Felipe Luiz used under CC BY 2.0. Desaturated with colour filter from original and cropped.

How do mergers of large firms affect markets? Over the past 25 years, U.S. merger review has focused primarily on the loss of direct competition between merging firms. This theory of unilateral effects—the assumption that the merged firm may increases its prices but that competitors respond only indirectly—underpins most merger challenges initiated by the U.S. antitrust agencies.

So when the merger of SAB Miller and Molson Coors was proposed in November of 2007, the Department of Justice (DOJ), hewing to the theory of unilateral effects, determined that prices were unlikely to increase substantially after the merger.  First, the DOJ verified that the joint venture would result in lower shipping costs, as Coors products could now be brewed at and shipped from Miller plants, and vice versa. Second, it determined that Miller and Coors competed primarily with the industry leader, Anheuser-Busch/Inbev (ABI), and not with one another.  In the context of unilateral effects theory, a combination of large cost savings and limited competition between the merging firms indicates that large price rises are unlikely.  Thus, the MillerCoors merger was approved in June of 2008 without conditions.

In Miller and Weinberg (2017), we document an increase not only in the prices of Miller and Coors after the merger, but also in the prices of the merged firm’s largest competitor, ABI.  We then estimate a model of demand and supply that allows us to test whether the merger softened competition beyond what would be expected through a change in only MillerCoors’ pricing incentives. Finally, we quantify the importance of coordinated effects, unilateral effects, and cost savings for prices and other economic outcomes.

The evidence we find is consistent with a reduction in direct competition between MillerCoors and ABI.  Such coordinated effects of mergers have received less recent attention than unilateral effects. They are more difficult to model because both economic theory and history reveal a seemingly infinite variety of tacitly collusive arrangements.  We believe this modelling challenge has deterred empirical researchers from confronting coordinated effects.  It may also have contributed to the recent de-emphasis of coordinated effects in the antitrust community (Baker and Shapiro, 2008).

Prices Before and After the Merger

Consider the average price of a 12-pack of bestselling beer for the three firms: the two merging firms (Millers and Coors) and the industry leader (ABI). Figure 1 uses supermarket scanner data from IRI and plots the prices of Miller Lite, Coors Light, and Bud Light.

For at least seven years before the joint venture, inflation-adjusted prices steadily declined. After MillerCoors, prices increased by about 8 percent, and the increase persists through the end of our sample.  Prices for ABI’s Bud Light increased by nearly the same amount. These patterns generalize beyond these three beers to the most popular package sizes and brands sold by Miller, Coors, and ABI.  In contrast, Corona and Heineken prices did not increase and roughly follow their pre-merger trends.

We found that the Miller, Coors, and ABI price increases tended to be larger in regions when Miller and Coors had a larger presence prior to the joint venture, and that the price increases tended to be smaller in regions where the merger resulted in greater reductions in shipping distances. As expected, there was no systematic relationship between either of these variables and Corona and Heineken price changes.  However, local market conditions cannot explain all of the price increases observed in Figure 1, because much of the increase in prices was common across all of the regions in our data.

It is challenging to explain why ABI, an outsider to the merger, increased prices by as much as Miller Lite and Coors Light through the lens of unilateral effects. The next part of our study therefore builds a model of supply that allows for an alternative explanation: coordination between the combined MillerCoors and ABI, while simultaneously allowing for unilateral effects and merger-specific cost reductions. Coordination takes the form of ABI and MillerCoors acting as if they receive a share of one another’s profits post-merger.

Our estimates are consistent with post-merger coordination. Interpreted strictly, our preferred specification implies that ABI and MillerCoors act as if they receive about 26% of their rivals’ profits after the merger, thereby softening price competition. This implies an increase in the ABI’s markups of about 18 percent relative to pre-merger markups. The increase in Miller and Coors markups are about twice as large, as they benefit from estimated cost reductions as well as higher prices.

While not sufficient to offset incentives to raise prices, we also estimate that the joint venture reduced Miller and Coors’ costs. We allow for this possibility to be realized in two ways: through a reduction in variable costs common across all regions and through a reduction in shipping distances resulting from rationalizing Miller and Coors production across breweries.

Figure 2 plots cost changes resulting from the merger on the horizontal axis against the corresponding change in retail price for Miller Lite and Coors light. Each dot corresponds to a different city. The change in retail price is not observed, but instead obtained by calculating the equilibrium prices that would have resulted from the merger holding costs constant at pre-merger levels. There is larger variability in Coors’ cost savings, as there were more retail locations that were nearer a Miller plant than a Coors plant prior to the merger. They range from $0.60 to $1.30.

Figure 2: Change in Price against Change in Marginal Cost

While it is impossible to rule any of these explanations out completely, there are challenges for each of them as an explanation for the price patterns in Figure 1. First, we do our best to capture ABI’s response to a unilateral price increase by Miller/Coors by estimating several different models of demand that each attempt to allow for flexible consumer substitution patterns. Second, we suppose the merger did not lead to any coordinated effects and estimate how big an ABI cost increase would be needed to rationalize the data, given our estimates of consumer demand and unilateral pricing incentives. This alternative explanation would require ABI-specific, persistent marginal cost increases concurrent with the merger that are in our view implausibly large, about 12 percent relative to pre-merger costs.

Did post-merger coordination meaningfully alter pricing and other outcomes from what would be implied with unilateral effects? We answer that and related questions through a series of counterfactual simulations comparing observed market outcomes to outcomes obtained with our model. We simulate three alternative scenarios: 1) the merger does not occur, 2) the merger occurs with efficiencies and without coordinated effects, 3) and the merger occurs without efficiencies and without coordinated effects.  Figure 3 shows Miller Lite 12 pack prices over time for each of these scenarios.

Figure 3 also shows that the merger resulted in a price increase of about $.50 per 12 pack. Marginal cost reductions were sufficient to offset most of Miller and Coors unilateral incentive to raise prices, but not enough to counterbalance coordinated effects. Figure 4 shows a similar figure for Bud Light, where observed prices are significantly larger than what we predict would have occurred without the merger.  The increase is almost entirely due to coordinated effects. Overall, we find that prices are between 6 to 8 percent higher than they would have been if the merger had affected Miller and Coors pricing solely through unilateral effects and lower costs, and not coordinated effects.

Our results imply that, if the objective was to prevent price increases for consumers, the MillerCoors merger should not have been approved.  The reason is almost entirely due to coordinated effects.

However, some economists would argue that a more appropriate goal for antitrust would be protecting the collective well-being of both consumers and stakeholders in firms’ profits. In aggregate, we find the improvement in firms’ profits—due to a fall in productions costs—were slightly larger than the cost to consumers. Thus, if the goal is to protect consumers and firms collectively, there is an ex post rationale for approving the merger.

If the objective was to prevent price increases for consumers, the MillerCoors merger should not have been approved

The progress in our understanding of unilateral effects is valuable and should continue but there is also a risk.  The current emphasis could lead antitrust agencies to overlook some mergers that do not pose significant concerns of unilateral effects but that facilitate tacit collusion.  The MillerCoors merger is one such example: the reduction in marginal costs was large enough to counter-balance the loss of direct competition, but evidence suggests that prices increased nonetheless due to softer post-merger competition.

The reluctance of the antitrust agencies to allege coordinated effects as a primary basis for merger challenges may stem from the underlying economics of tacit collusion.  Because tacit collusion can take many forms, it can be difficult to identify the specific mechanism through which a merger would facilitate coordinated effects. The inability of the Federal Trade Commission (FTC) to articulate this mechanism, for example, was cited by the court in its ruling against the FTC in the Arch Coal merger (FTC v. Arch Coal, 2004).

An important—and difficult—challenge for economists, then, is to develop empirically grounded models that can better support analyses of coordinated effects.  Such research could improve upon the generic “checklist” of relevant considerations that dates back to Stigler (1964) and that is described in the Merger Guidelines.  This could allow coordinated effects analyses to be better tailored to the specific institutional details of the market in question.  Some theoretical progress already has been made (Ivaldi et al, 2008), and empirical research should follow.  To be clear, our study does not address this challenge directly.  However, by providing empirical evidence that–indeed—tacit collusion can arise post-merger, we seek to spur research on the appropriate scope of coordinated effects theories and on the underlying economic mechanisms.

This column summarises ‘Understanding the Price Effects of the MillerCoors Joint Venture,’ by Nathan Miller (Georgetown) and Matthew Weinberg (Drexel), forthcoming in Econometrica